December 27th we headed out for a week* of adventure. We started with a ferry from Gelibolu to Lapseki and then travelled nearly an hour south to Geyikili. At Geyikili after a long wait we caught one of three daily Gestas** ferries to the island of Bozcaada.  as the family travel planner and booking agent, I wasn't surprised by the view from the ferry, but I still thought it was a "WOW". 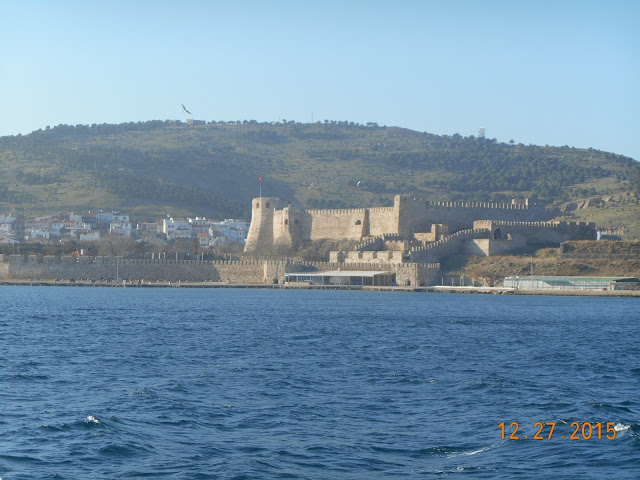 The arrival of the ferry caused a mini rush hour at the harbour and of course that was the moment our mostly uncooperative new Garmin GPS choose to completely lose its mind and quit transmitting.  Thankfully one of our back seaters pointed out that we were right behind a taxi displaying the name of our hotel.  So in a Turkish version of "follow that car", we tailed the taxi until he parked near a construction site on a dead end street.  Getting out, we discovered the driver was also our host at the hotel and the hotel was in fact steps away. 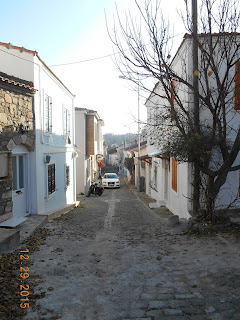 Parking in front of the hotel meant we would have to make two turns down tiny lanes which would have been fine if we were driving something smaller than the X-Trail, maybe a Mini or a Smart Car.  Anyway our host found us a better place to park, far from the drift of construction debris and only a couple of short blocks on cobbled streets from our hotel. 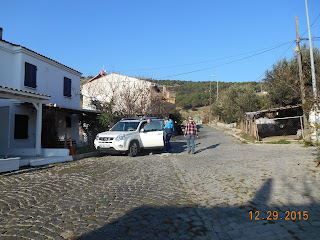 We didn't do much more than nap, take a walk and eat supper the day we arrived. Oh and I had to find the ATMs so I could get enough Turkish Lira to pay our hotel bill in cash. I booked with booking.com which said the hotel would take credit cards but small private hoteliers prefer cash.


The next day after a deluxe Turkish breakfast in the "garden" of the hotel, a small walled patio outside the kitchen, we went for a drive.


The Fortress of Bozcaada has been in existence since Venetians were in the area in 1464 and perhaps earlier.  The island was under Roman rule from 133 BC. 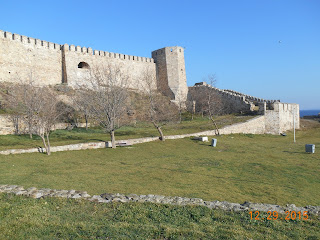 Turkish "castles" and fortifications are often nothing more than ruins due in part to their age, earthquakes and the incredible cost of upkeep. This one was a nice surprise. 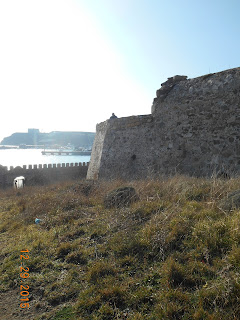 One last story:  We had supper at the same place on the harbour the first night and the last night we were in Bozcaada.  The first night we saw a man come into the restaurant with a whole fish in a plastic grocery bag.  He ended up in the kitchen.  The second night, the same thing happened, but this time I paid attention.  It wasn't long until the same man walked past the restaurant towards the fishing boats docked on the harbour.  This time he had no fish, but grocery bags and a six pack. The fish is fresh and local and fishers are paid in cash.

* Sadly our week away was cut short because of cancelled ferry sailings to Gokceada.  The weather took a turn on December 30, so instead of trading one island for another we came home.
**Just a note about Gestas's website.  Good Luck!  Yes they do have an English page but you're better off translating the Turkish site with Google Translate or better yet get a native Turk to interpret or phone.  The folks who answer the phone have just enough English to tell you they don't speak English.  If you've got a little Turkish, you'll make out okay.
Posted by Susan 1 comment:

Four years ago, today, we arrived at Ataturk Airport in Istanbul, dazed and slightly exhausted from a fabulous week in London. Upon arrival, we scrambled to board a second flight and travel to Ankara where we applied for residence permits.

Today, we got out of bed in time to meet a Turkish speaking colleague of Cam's in Gelibolu.  He helped us get passport style photos so that we can once again apply for residence permits.

We've been through this process a few times, but have been mostly isolated from the paperwork and bureaucracy. There is a manager and an office brimming with lawyers who handle the fine print. All we've had to do is provide copies of our documents, get our photos taken, sign some forms, have a criminal records check and get our address confirmed by the local municipal office. Whew!

Today reminded me of that first time four years ago, when it all seemed like a grand adventure.  Today, it was just an item to cross off on the "to do list"; somewhere between breakfast and going to the bank.

How to ride a donkey

We've lived here four years and in that time I've seen a lot of sights which have amazed and surprised me.  I keep thinking at some point, I'll be as oblivious as the people around me.

We went to Gelibolu this morning to get groceries. The kids and I walked from the Pazaar to Kipa and saw this gentleman crossing the four lane road on his donkey. 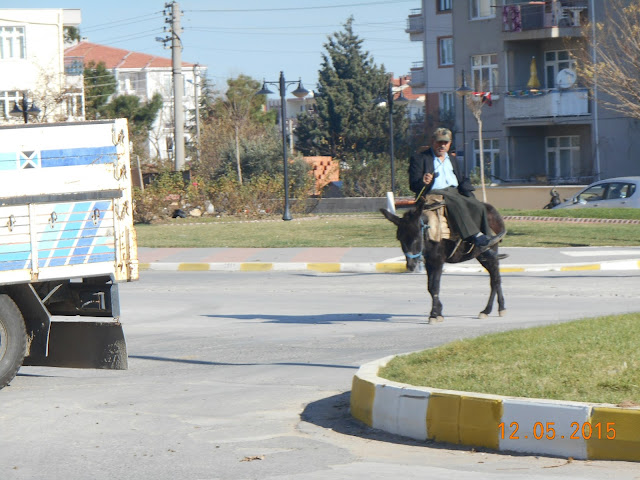 You should notice than there is traffic.  He is sitting side saddle and what he has in his right hand is not reins but a riding crop which he uses on the side of the donkey's head to turn it left or right.  For our farm friends notice that he is wearing pretty nice shoes, a suit jacket and a dress shirt. 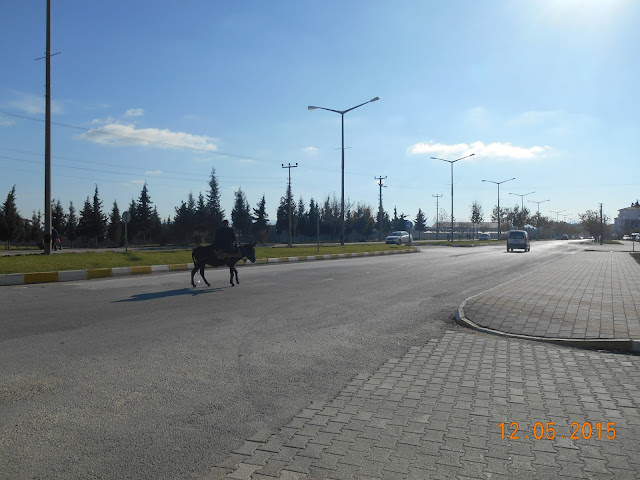