Chai and a show

Tea and a show


There are some unique things about this part of the world and how they do things.  For example, I needed some rope to mark off some pits, etc on an existing location.  Off I went to the Sanayii ( industrial area) of Kesan.  I went to a general hardware store I’ve been to several times with lots of assorted goods, including 3 or 4 sizes of rope.  That store is a story in itself.  It is completely lined with shelves from floor to ceiling all filled to overflowing with stuff.  The otherwise clear floor space has aisle type shelving 4’ high likewise filled to overflowing with stock.  Hand tools, power tools, drills, calipers, welding equipment fasteners, cable, and all manner of other hardware items.    All a little warren of aisles and stock.  There is only one aisle in the store wide enough for two people to pass comfortably- right in front of the main counter.  All others in the store are single lane only.  A couple you have to back out of if you walk into.  At some point, they decided their premises were too crowded and they rented a store front two doors down and proceeded to fill it with other goods like hoses, pumps, pipe fittings (all low pressure and either plastic or galvanized).  The second store has no cash, and is often unmanned.  It is monitored by CCTV cameras located high up on the walls and displayed in the main store.


Because I’ve been there before, the clerk that speaks some English bustled out from behind a shelf and did his level best to help me. With the English he knows and the few words of Turkish I’ve picked up we usually determine what I need,  whether or not they have it, and what it might cost.  I selected a braided rope of about 8 mm (3.8”) dia.  With my admittedly limited Turkish, I managed to ask how much it cost.  The reply set me back somewhat.  “25 Lira per kilo”.  Per Kilo?!?? Really??!?  Yes, really.  Well how many meters per kilo?  I don’t know.  I will ask my boss.  He says approximately 30 – 35 meters per kilo.  Well, I need 200 m.  Out came the calculator and an estimate was punched up.  After the estimate calculated and agreed to, the show started.  The manager of the store called for assistants and had them tote the spool of rope outside onto the sidewalk.  Meanwhile, the assistant with the smattering of English brought me Chai to drink while my order was filled.


The little crew commenced to take a short tape measure (5 m if I recall), and mark off 50 m on the sidewalk.  They laid two loops between the two lines off the spool to make 200 m.  After cutting 200 m off the spool, they carefully coiled up the rope in a large, loose coil and tied it off with twine.  Then they brought the rope into the store, cleared off the old style balance scale and then the argument broke out about where the weights for the scale were.  All Turks speak loudly and rapidly.  If two Canadians spoke to each other like these guys do, I’d be changing into my striped shirt and reaching for a whistle....  Finally, the weights were located, the rope coil weighed, and a lengthy explanation given of how to put it down with the knots in the twine securing the coil on top and uncoil it in this direction just so to keep from tangling it.  I finished my Chai, paid up, and opened the hatch of the car so one of the assistants could load the coil and the other small items I’d bought, and fled. 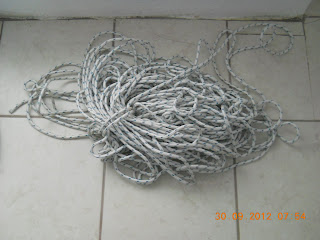 For those who don't know, this is what 1 1/2 kilo of rope looks like...
Surprisingly, barbed wire is sold by the Kilo too.  Not in the 80 rod roll like at home.  Asking how many meters is likely to net you a blank stare.  The shop keepers in the two shops I asked didn’t know, even roughly, how many meters were in a 20 kilo roll of wire.
Posted by Cam No comments:

New Mosque and Dinner Under the Galata Bridge

Getting there is half the fun


We used taxi cabs to get us to and from the hotel when we were in Istanbul. For five us that meant travelling in two cabs.  Five Turks and a driver would have happily and easily piled into a single cab but we chose to use two.  There are lane markings on Turkish city streets and highways.  There are also speed limits posted.  This didn't prevent our cabs from travelling three or four a breast with other vehicles when necessary, or for doing 80 or 90 k down a city street. Until the last trip, I always sat in the front with the driver so I didn't realize that there weren't working seat belts in the back of the cabs - where the children rode.

On our first day, we had to back down a narrow/ancient street in front of other vehicles doing the same, in order to allow a huge tour bus to make a corner. Many times during our cross town trips, our drivers would be talking to one another out their open windows.  I can only guess they were confirming the route they would take or where exactly the destination was located. On the final journey our cab driver double parked on a narrow street, jumped out of the cab and raced into a nearby building.  Nicole and I were left in the back of the cab wondering what was going to happen next. Moments later, the cab with Cam in it pulled along side.  Turned out our driver needed the washroom so ...  At a stop light he jumped out again and borrowed a cigarette from Cam's driver.  Smoking, talking on your cell phone and shifting gears simultaneously are necessary skills if you're a Turkish driver in Istanbul.  It's a wonder to me that there aren't more accidents.

The kids thought the cab rides were FUN! With the windows rolled down to keep us cool and dissipate the smoke, the quickly changing scenery made the trip into a roller coaster type adventure.


If you received this blog post by email and wish to leave a comment, click on the blue link to the blog "Never Miss an Opportunity" at the bottom of this email.  This link will return you to the blog where you can fill in a comment form. More directions are on the left hand side of the blog page.
Posted by Susan No comments:

On Wednesday, September 19 we toured the Hagia Sophia (Greek for Holy Wisdom). The present building was rebuilt by order of the Emperor Justinian and his wife Theodora in 532. According to our guide, it took 10,000 slaves five years to complete. After the Ottoman Turks conquered Constantinople, as Istanbul was known then, the decision was made by the Sultan to tear down the cathedral and built a mosque in its place. However, his mother was a Christian and out of respect for her; he left the building standing but covered many of the Christian symbols and mosaics. After Turkey became a republic in 1923, the building was briefly closed and then reopened as a museum in 1935. There have been some efforts made to uncover the mosaics.

The Topkapi Palace was our second stop on Wednesday September 19.  The Palace consists of a number of buildings which were used for public government meetings and for the private use of the family.  Inside the walls there is a large green space.  We looked inside some of the buildings and were able to view a number of the Palace’s collections which include furniture, jewels, and swords. On display in one room was the stunning 86 carat Spoonmaker’s diamond.  It was found in a rubbish heap according to the tale and exchanged for 3 spoons in the market place.  Photography was limited in some of the rooms and forbidden in others so my photos consist primarily of exteriors.  In one set of rooms there are many Muslim artifacts linked to Mohammed, including some of his clothes, his sword, and hair. In this same set of rooms we saw David’s sword, Moses’ staff, Abraham’s saucepan,  Joshua’s turban and John the Baptist’s arm bone (in a metal glove) and skull. I had no idea these kind of relics were on display anywhere.  If you’d like to see pictures; Google “Topkapi” and the items by name and you’ll find amazing pictures. If we have a chance to go again, I'd pay the extra cost and see the Hagai Irene and the Harem (private quarters for the family).
Posted by Susan No comments:

Everybody has an angle. 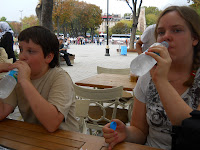 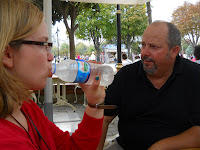 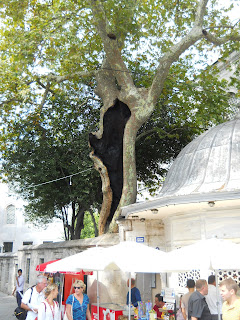 After the Hagia Sophia we stopped for a drink and bite to eat (pop/water and fries).  The tables were covered by umbrellas so we were out of the sun and then out of the rain when it rained. Afterwards we paused on the corner so I could take a photo of this cool tree. (above)

A man approached us and asked if we were from America.  He was very friendly and spoke excellent English. He began by telling us he was visiting Turkey from Florida where he's lived with his American wife for 24 years.  They brought their neighbours who were touring the Topkapi Palace. He names all the places in Canada he's been and tells he knows more about our country than we do. (Hmm.) Then he takes a phone call. When he's finished, he says he's building a house in Turkey and by the way we should really buy Turkish carpets while we're here. Would we like some tips on buying Turkish carpets?  (Well ok but we've bought carpets.) So he tells us to buy wool and naturally dyed carpets. (OK well nice to meet you ... but we have carpets and today we are visiting the sites.)  Then he starts again.  We could come to his shop.  It's twenty minutes away and he could show us what to buy and it won't take very long and ... (Unhuh)

Cam and I gave each other "the look", politely said no thank you and walked away. Maybe he had an American wife, visiting neighbours and a house under construction, and maybe not.
As Cam says "Everybody has an angle".
﻿
Posted by Susan No comments:

Leaving on a Jet Plane