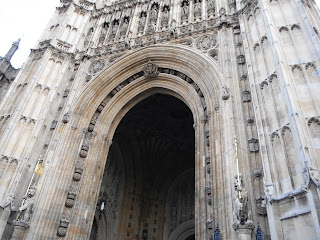 There is a no pictures rule inside the abbey so I have no pictures of the interior only the outside. This place is enormous! The first floor is at least two stories high. It's made almost entirely of marble, except for the seats in the quire which are wooden. The high altar is surrounded by gold with people buried on either side. The floor of the altar is marble layered with semi precious stones. We aren't allowed to walk on it because it is old and fragile. Candelabras hang from the ceiling. There are stained glass windows high up. Marble columns support the roof. Statues are everywhere; busts of kings and elaborate tributes that probably cost fortunes carved with horses and lions, angels and biblical figures. Buried here are: Kings, Queens, Writers, Parliamentarians, Composers, and the list continues. The less important or less rich are buried in the floor. I am standing beside William Wilberforce the abolitionist. William Pitt is buried here too. Larger than life statues make me feel small. James Wolfe the English General from the Plains of Abraham is buried or has a monument here. Lions support two ragged flags that I assume were carried into battle that day. Some floor stones are so worn that the names of those buried there cannot be read. They are nameless.

The same Franklin as was lost in search for the North West Passage has a monument here as well. The inscription reads: Not here the White North has Thy bones and thou heroic sailor soul art passing on Thine happier voyage now toward no earthly pole

There are quite a few inscriptions in Latin. Many of the statues are missing fingers. The Coronation Chair is here as well. It definitely looks its age. The Stone of Scone as in the "Stone of Destiny" is still in Scotland.

In this Abbey are buried or were buried these famous figures: Oliver Cromwell short lived Lord Protector of the Puritan government, Queen Elizabeth I, Mary Queen of Scotts, Robert Browning, Geoffrey Chaucer, Lewis Carroll, Edward Lear, Charles Dickens, Thomas Hardy, Muzio Clementi, Sir Francis Drake, Captain James Cook, Charles Darwin, and David Livingstone to name a few.
There are Monuments to: William Shakespeare, Longfellow, and Edward Hailey of Hailey's comet, and to the Unknown Warrior. Before you list off these to anyone else you might want to check me about who's buried and who is not. My notes aren't that great.

If you ever go to London Westminster Abbey is a place you should definitly see.
Posted by M Johanna M