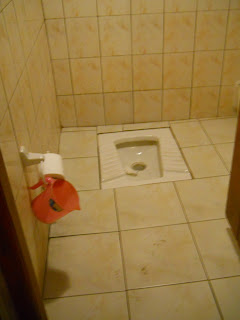 What you can't see is the faucet, usually with a short hose attached so you can fill the bucket and I'm guessing clean up after yourself.  This toilet is in the ladies washroom at our new favourite restaurant. It is very clean compared to some I've seen.  It also has toilet paper which is rare. Cam says in Kazakhstan this is called a Turkish toilet.

Hand soap and paper towel at the sink aren't common place either.

In order to save energy (?), or prevent loitering (?), most bathrooms, including this one, have a motion sensor light so part way through your time you have to wave your arm over your head to turn the light back on.

In many places there is a sign in the bathroom that says: 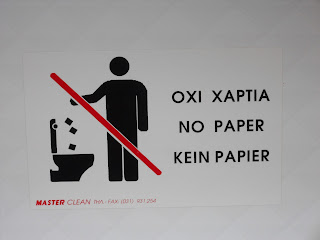 I'm guessing that you're never supposed to put paper in the toilet and the signs are only a reminder of what is commonly understood by natives. The first place I saw a sign like this was at a restaurant at the harbour in Gelibolu.  I assumed at the time that the toilets flushed into the harbour. Watching the fishing boats from our table gave me an uneasy feeling. We saw these signs in Greece too.
In public places (shopping areas, tourist destinations, gas stations), there is often a WC (water closet) sign.  These public washrooms usually cost one lira per person.  There is always a booth or a table where a person sits to take the money.  This person also keeps the bathrooms clean and tidy.  Beside these public facilities there is often a place for observant Muslims to wash before they pray.
In Greece it was very common for there to be a cubicle for men and one for women side by side sharing a common mirror and sink. It felt odd to be in the washroom line up with men.
We stopped for gas in a pretty little village between Thessaloniki and the border for gas. Unfortunately we all had to go. The gas bar service station was the worst I've seen anywhere (including the Esso in Airdrie in 1999 .... burned in my memory for its squalor). The paper basket was over flowing, the floor and the toilet were filthy and to add insult neither toilet had a seat. Of course there was neither paper nor hand soap.